Libri e Emozioni is pleased to welcome again the Australian writer Annie West and her latest masterpiece entitled “Reclaiming His Runaway Cinderella”… well it’s true, as you can guess from the title, the novel published by Harlequin is in English, but I trust that soon, as happened with many other books by the author, this will also be translated into other languages, including Italian. 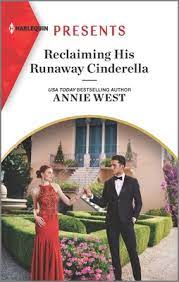 Far from the generally stereotypical love novels, “Reclaiming His Runaway Cinderella” exalts the woman thanks to the main character, Ida, a Cinderella who, lost her shoe, does not wait helplessly for the Prince to return it.

“She’d shown a strength and determination he hadn’t noticed before. But it didn’t explain the compulsion he’d felt, the need for her.”

Ida is a multifaceted character, a young woman initially almost unaware of her own sensuality, who looks like a fearful and submissive kitty, but I loved her change and the lioness who, line by line, clawed the pages with force to come out and regain her dignity.

Ida is the exaltation of female strength and represents every woman who must struggle in her life, to assert herself and oppose bullying and injustice.

The main male character is Cesare. Charming, cultured, rich, he seems to be a “catch” that all women dream of. And indeed he is, or rather, he would be completely, if old family grudges did not oppose the love between him and Ida.

The novel starts with the marriage of the two young scions, but not always the wedding is the conclusion of a beautiful love story and here, Annie West has been able to measure the pathos of a first night stained by accusation and misunderstanding, laying the foundations for a shattered dream that opens the dance to an unexpected escape cloaked in self-respect.

“Ida woke to the sound of someone moving about in her room./ Heart pounding, she jack-knifed up. Wisps of nightmare still fogging her brain.”

The rest of the story is a frantic quest of Cinderella, but while in the fairy tale known by all, the Prince ignores what is the true identity of his dance partner, here Cesare knows perfectly his bride or so he believes, until he finds a new woman who has little to do with his Cinderella.

So what will happen to the newlyweds? The mystery that follows this first question is all to be revealed, between twists, vindications and wounded pride. Will the heart win once again, or will Cesare and Ida choose to part ways forever?

“Yet the look in those dark, serious eyes made her heart judder. / When she managed to catch her breath, her voice was so husky it sounded unfamiliar: ‘I feel the same’.”

So I suggest you read “Reclaiming His Runaway Cinderella”, to find out if this modern fairy tale will be accompanied by a happy ending, or if the compromised situation will prevent to shed light on a past obscured by violence and lies.